The Last Little Corner of Vermont  and the Making of “Resilience” 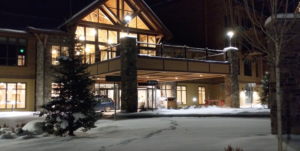 Front Side of Burke Mountain Hotel

“Two roads diverged in a wood, and I–
I took the one less traveled by,
And that has made all the difference.” By Robert Frost

Thanksgiving weekend, the opportunity arose for our family of four to head to Burke Mountain to film a story.  We of course had heard great things about Burke and had it on our bucket list of mountains to ski. Normally we have a few weekends of skiing under us by this time of year, but commitments close to home kept us local.  We knew most of the crowds would be at Killington albeit spectators, watching World Cup Champion, Mikaela Shiffrin win the Slalom Race at Killington for the 3rd year in a row. It was nice to unwind away from it all and have the slopes all to ourselves, for our first day of the season. As a bonus, we got to ski where Mikaela got some of her first training in, with the Burke Mountain Academy.

When we first arrived at Burke I could not help but to think of Robert Frost’s poem “Road Not Taken.” It is true what they say, this really is the last little corner of Vermont, and it holds the treasures many of us seek, who yearn to experience life simply in nature.  Living in an urban environment we take simple tasks for granted. To us it would seem, that most people would want to make this a travel destination to escape their lives for these reasons, but it is more likely for most to take a more popular route, and that is okay. It is not for everyone, but if you can experience it, you will find that it will be worth coming back to.

While visiting Burke we stayed slopeside at the Burke Mountain Hotel, conveniently located mid-mountain, and offers easy access to their main lift. The last owner Quiros, planned to turn Burke Mountain along with its new state of the art hotel into a private resort. We won’t get into the scandal that went on, but the positive is that the hotel opened last year, and can accommodate big events such as weddings and conferences, but also a skiing family like us. It has not only become a winter destination, but apparently has even more visitors coming in the summer for its MTB trails. With beautiful vistas and  direct view of Lake Willoughby, the hotel makes an ideal place for weddings, offering conveniences for all guests.

Slopeside view of Burke Mountain Hotel with easy access to both the Magic Carpet and the Mid-Mountain Express. Willoughby Gap in Background.

In addition to skiing, we took advantage of the hotels amenities including outdoor pool and hot tub, arcade and on site dining. Having a 1 bedroom suite with a full kitchen made it especially easy for our family to relax after a long day on the slopes and have the option of making our own meals. 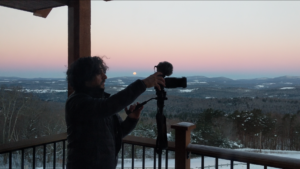 Ray setting up a shot from our balcony as the moon set. 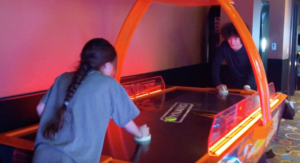 We even had our own Air Hockey Tournament in the Arcade.

There are many reasons why we picked the name “Resilience”  for our vignette of Burke Mountain. At first, you may think it was for the many top athletes that have come out of Burke, but it was named so, for the resilience of the local people.

You will not really get to know a mountain unless you get to know the people who work there and Burke is no different. When researching Burke, we discovered like many ski mountains, it has faced many challenges.  This is nothing new to the area, going back as far as before the Revolutionary War, when the first settlers arrived in 1792. You can imagine them arriving off the boat and traveling along blazed trails to reach their destination.  It took a lot of toughness to get there, and even more to survive its harsh winters.

When we were planning our film shoot,  we discovered that Burke Mountain went bankrupt nine times. Each time developers came to Burke with ambitious plans, to only fail. Somehow through it all Burke has been able to endure.  I like to think it is because of its genuine staff, who take pride in their mountain. It comes through in everything they do, from being greeted in the hotel at check-in by friendly staff like Jerrell, to its snowmakers and groomers, like Tyler and Connor, whom we met in the Bear Den. You will find its dedicated employees, running the lifts, filling in wherever they can, without complaint. The give back to their community and their community to them.  You will find them on the trails, as they realize the treasure they have. They share their rich heritage with us on its narrowly cut winding trails across its steep ridgeline.

If you stop by the Bear Den, you will be sure to run into locals who are all passionate skiers and riders of the mountain.  They are sure to share with you secrets spots on the mountain or the stoke of the day. If you take a visit you too are sure to discover, the locals’ passion for the mountain that make this a destination worth taking. 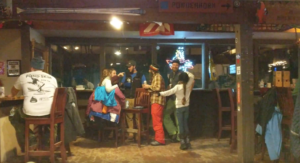 Hanging out with Connor and Tyler in Bear’s Den after an awesome day skiing.

Black Friday turned out to be a chilly one, but it did not stop us from having a great time.  It seems to me that Burke is by design for the more experienced skier. This may not be the case in the high season, as the lower mountain, where the beginner terrain is located, was not open yet. As we rode up the Mid-Burke Express, that runs parallel to the Upper and Lower Warren’s Way (a class A race slope) named after Warren Witherell, the legendary race coach who founded Burke Mountain Academy, we could see the huge whales of snow being pumped out and could imagine gold medal hopefuls racing down. It is not surprising that the Burke Mountain Academy partners with the US Ski Team, to produce world-class athletes. Taking the tow rope up this trail, their skis never leave the snow.

Snowmaking on the Lower Warren’s Way

While there is only one peak, Burke offers varied terrain.  Our favorite run was East Bowl, which is a very challenging run. Even though there was lots of fresh snow, there were still water bars hidden underneath, due to it still being early season.  We were also particularly fond of Rerun and Doug’s Drop, for the bumps. Really nice cruisers were Upper and Lower Willoughby, especially in the afternoon with the sun setting low. We are hoping we can make it back one day to explore more glades.  Ray was able to join Adam Lukowski, Videographer for Burke Mountain and his friends on some unbelievable glades, filled with pockets of powder. 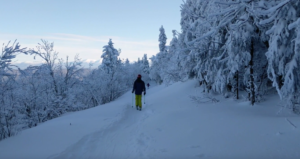 Nice narrow trail heading over to the East Bowl Trail. 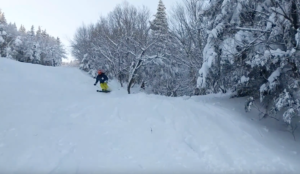 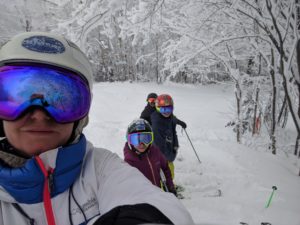 Us about to enter Lew’s Leap with exceptional snow coverage. 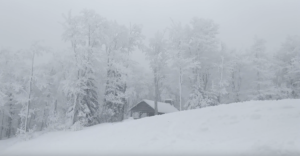 Pavillion on Mountain  off of the Toll Road that offers the perfect setting for all seasons. 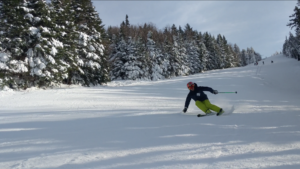 We can’t say enough about this mountain.  There is a certain pride the people who work here have, and it is because of this the mountain has shown its “resilience” through the years. We highly recommend Burke Mountain, to skiers that are looking for a mountain, that is not only challenging, but off the beaten path; you will be happy you went. We have only been twice, but we can’t wait to go back for more.

More info on the area:

For more information on Burke Mountain be sure to visit:

After a day out on the slopes be sure to stop by Bear Den.

If you are into MTB or Winter Fat Bike, or maybe even snowshoeing you will want to check out the Kingdom Trails, voted by Bike Magazine as “The Best Trail Network in North America”. For more information:

Juniper’s Restaurant at the Wildflower Inn

On our second visit to Burke we were able to venture off a bit more.  We enjoyed a dining at Juniper’s Restaurant, which features farm to table options that fit any palate. 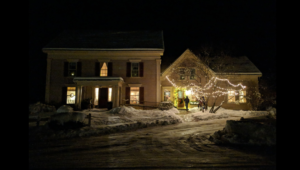 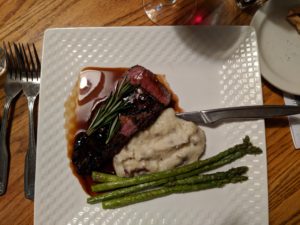 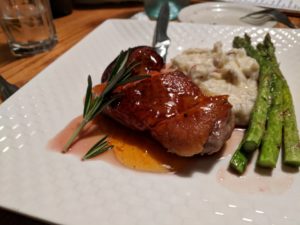 Another Great find is the WilloBurke Boutique Inn and Nordic Spa.  You can find out more about their lodging and Nordic Spa at: https://www.willoburke.com/

If you are seeking a good coffee and want to venture to town, be sure to check out Café Lotti’s.

No visit would be complete without visiting the historic Northeast Kingdom Country Store, which not only carries local crafts and foods, but also has a small cafe for sandwiches and coffee.